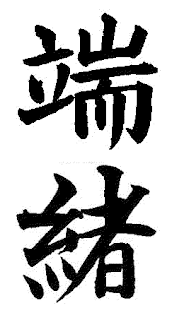 In some of my earliest (and of course later) Blogs, I discussed the principle of having/using a primary defensive action. This principle is based upon the use of a defensive action that will protect the user regardless of an aggressor's manner of attack.
This translates to a motion that affords an effective defense against an aggressor's strike (of any manor), that will also allow multiple options for counter-striking ability.
Too often systems will teach a Left/Right (manor of) defense. This would be fine, if you were always aware of which one an aggressor was going to use. The fact is, is that you'll never know (exactly) for every situation. That calls for having a defense that can respond to any possibility.
RyuTe begins the training of students (in this manor of defense) with the Cover/Strike Defense (though officially/technically “unnamed”, this is how our school has chosen to identify this motion/response).
This motion will provide defensive options from multiple attacking methods. Initially the student is shown defense from the typical (aggressor's) Right handed “face/head” strike. This is followed with defense from a Left handed “face/head” strike.
These are followed with Hay-maker's, uppercuts and windup's being performed with either hand. All of which should be practiced with either side being defended against (while utilizing the same defensive motion).
The main emphasis of practicing this type of defense method, is learning that a single motion has the ability to defend against each of these different manor's of attack.
It should be obvious how this would prove beneficial (defensively). By eliminating the need to make a Left/Right defensive decision, one's defensive speed/capabilities are greatly increased. We have student's practice defending against each manor of attack, until they are comfortable utilizing that same single motion (regardless of the aggressive method being utilized).
I've briefly explained one defensive application with this motion in a prior blog, but that same motion is used in each of the described (different) manors of aggressive strikes.
As opposed to having to learn 8 different manors of defense (for the different attempted attack methods), we train student's to practice one (technique) that will deal with each of those attack methods.
This allows the student to concentrate on their own motions, instead of how to determine what an aggressor is attempting to attack them with. By focusing on their own motion, they will increase their reactive ability, and learn to (better) apply it during an actual defensive situation.
The slight variations between the defenses for the different attack methods are so minor, that once learned, the practice of any of them will (equally) benefit the practice of the others.