“Strikes are the primary weapon for defense. But if that defense is breached, we practice trips, sweeps, throws, and takedowns; and “then” basic grappling techniques.” 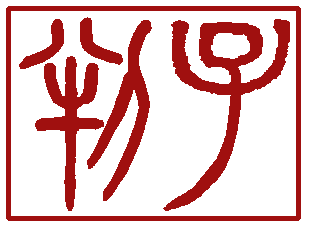 Recently on a discussion board a question on the subject of “seals” came up, and various responses were made.(including some made by myself). There exists a wide variety of seals, and how/where they are appropriate, as well as inappropriate. In the Eastern Asia area, they are often utilized as signatures and stamps of “validation”. In the West (U.S. And Europe) they are mostly used for “effect” (or “looks”).


The most popular use of them is on “Art” pieces, and by practitioners of Shodo. There are several commonly used versions/types, and martial arts students/instructors will often utilize them on certificates (of rank). There are stamps (hanko) for personal names, for “ranks”, for groups/clubs and associations. In the East they are registered with the local government (and have particular requirements for their submission prior to their usage/recognition) In the West they are mostly utilized because they “look” official and they do have an artistic quality to them (that's added to the document with their usage).


Although they have no “Legal” validity they are still (often) utilized by martial arts groups for “validation” (within the issuing group). To be honest, they often just “add” (ascetically) to most certificates.


For what-ever the reason for their usage, they should none the less be utilized correctly. I'll attempt to explain their usage (within the martial arts arena), and that means upon certificates and signatures (and the types of seals that are utilized for that purpose). For those students of Shodo, “their” usage of/for a “name seal” can be different from that usage within the M.A. Field.


Student's of brush Calligraphy (Shodo) do not use stamps on their (weekly,monthly?) assignments. They may utilize them upon a display (art) piece, but they are only used on those pieces that have been completed (“stamps” are the final addition placed).


For the martial artist/instructor, they will commonly use them upon issued student rank certificates. These can be for use with their (both the student & the instructor's) written name and/or for authentication of/for an individual group or club. They carry no “legal” aspect to their use, but only as validation to/for members within the issuing group. Any recognition beyond that group is purely for reasons of courtesy.


There are basically 2 “types” of stamps, “Light” (“Yo”) and “Dark” (“In”). The “Dark” seals are used for one's actual name, and for “motto/phrase” seals. “Dark” seals are carved into the seal itself. The “light” seals are used for pseudonym or “pen names”(they are also utilized for title/rank designations). “Light” seals, have been carved “in relief” (only the carved characters actually contact the ink/paper when “stamped”). Group and association stamps are normally the “light” (type) of seal, though this designation is irrelevant in the West (and have no legal validity anyhow). The majority of martial artists are commonly concerned with “name seals”. Unless that instructor has a Japanese/Chinese name, their name will need to be translated into Katakana, the Japanese kanji that they use for “foreign” (to Japan) words/names (I am not familiar with Chinese usage, so I'm not really sure “how” they would do this, I have to “assume” that is it done similarly).


Once this is done, the person can (more easily) attempt to “match” those sounds to Japanese/Chinese kanji (that will convey a saying/meaning when used together).


Though some (many) people have hanko (seals) carved in katakana, these make for (very) mundane name seals (and “looks” like a foreigner's seal). It is far more popular (and visually appealing) to utilize Japanese kanji that have the same/similar “sounds” (when spoken aloud) as the user's name (and preferably will have a legible translation as well). When done (correctly) this is the most involved part of a name stamp's creation (requiring a great amount of time, effort). Though this is often done through utilization of (any) kanji that “sounds” correct, it is more pleasing (for the stamp's owner) for it to convey a “meaning” (as well as sounding like their name).


For the majority of “official” and name seals, the style of “Tensho” (“seal script”) is the style used for the kanji. There's commonly (though not always) multiple ways (kanji) that this can be accomplished (therefor the “time” requirement). If/when the person is familiar the with Oriental “poetry” (styles of writing) that knowledge can aid the person doing the combining of kanji.


The majority of “official” seals, will additionally have a “line” that encircles the name of the person/organization (ie. A “border”).
Though “open” seals (without a border) are used as well, the one's with a “border” carry a more “official” look to them (this could also be the “personal preference of the person whom the seal is created for).


Today, seals can be ordered and be (either) carved by hand, or via a machine. There are stamps that are done in “rubber” (though these have a limited life), they have a tendency to “distort” (over time), but the one's carved in (commonly) “soap stone” can last for the lifetime of the owner (though they are subject to damage if/when miss handled/used).


The hand-carved one's are also more expensive (but “look” much better /authentic, IMO). There are also seals that are carved from wood, but they are similar to the “rubber” ones in durability/lifetime (thus are rarely utilized).


Stamps that are carved in stone, are (often) intentionally “damaged” (around their edges). This adds individuality to the seal (making more difficult to reproduce/”fake”). In this day of computer imagery though, the “originality” of a stone seal, is no longer a guarantee of authenticity (any seal is able to be “copied”, and the ability to reproduce a seal-stamp is more easily accomplished and will thereby compromise the stamps uniqueness). For that reason (in the West), Stamps are (only) utilized for ascetic reasons.


“Certificate” seals (which is what the majority of M.A. Utilize “stamps” for/upon) have certain common placement locations (when used upon certificates). An instructor's name seal is placed (either) directly upon, or immediately after the instructor's name (written in katakana). I've seen (numerous) examples where the instructor (actually) "brushed" their name in “kanji”. This is regarded as “tacky” (if not “unprofessional”) if the individual does not have a Japanese name (meaning if/when “Westerner” does so). The instructor's name should be written in Katakana (if/when they are not Japanese)."Name" seals, are the exception to this practice (that, and the fact that they are carved in "Tensho" style kanji).


There are commonly (several) additional seals that are used upon group/association certificates. There may be an “association/group” seal. This could be placed at various (their choice) locations upon the certificate. There may be a “Dojo/school” seal (again placed at  designated location). And there is (often) a “partial” seal, located along the edge of the certificate itself (the remainder of the seal is stamped at the same time within a record book). This stamp is for record purposes (for any {internal/external} inquiries regarding the certificate's validity).


For the most part, the only people interested in the use/possession of “seal-stamps” are (either) artists, or martial arts instructor's (for use on art works, and/or certificates). I see numerous versions being utilized that (IMO) have obviously not been (sufficiently) researched prior to their creation. If you have chosen to (either) have one made, or carve it yourself, do the research prior to it's creation. Yes, it's some (mental) “work”, but the result will be a stamp that you don't have to be concerned with being ridiculed (in regards to how it was done).