The majority of students that choose to attend a “martial arts” school, are people wanting to learn to learn a method of protecting themselves (and/or their loved one's) if they should become involved in a physical confrontation. That instruction is commonly centered upon that confrontation being with someone not known to them (ie. A “random” encounter) and that the aggressor does so with criminal intent. The statistics actually refute that assumption.
Examining available police statistics and reports, the most common physical confrontation will be with individuals known (often intimately) to the victim. This should in no way dismiss the occurrence of random acts of physical violence by individuals (previously) unknown to the student, only that the “odds” are, that it will be most often with someone with whom the student will have some manner of relationship with.
When students begin their study, they will often envision an unknown individual as being their aggressor, and their study/practice will often be centered upon that premise. Aside from being unrealistic, this attitude can prove to be detrimental (in regards to accomplishing that goal).
Many of the “popular” schools/methodology's capitalize upon this (mistaken) premise and emphasize the use of applications that are excessive in their (physical) effects (upon the aggressor). Students exposed to (only) this manner of instruction, will often respond to a (less than serious) confrontation with excessive force/responses.
Though accomplishing the “basic” premise of protecting the student, it places the student at (greater) risk of legal repercussions. This is often justified by a declaration of “better safe than sorry”... which is a very “jingle-esk”, but is also unrealistic itself.
Other than a law enforcement official, the “common” citizen is rarely involved in a “life-threatening” situation. Official statistics will verify this, serious acts of violence have steadily decreased over the past 20 years. That's not to say it doesn't occur, only that the “odds” of being in a random “life-threatening” situation are very small.
The most commonly occurring physical confrontation will be with persons known to the victim (often being a “relative/partner” of the victim). Although this can escalate to being a life threatening situation, they more commonly are not. The majority of deaths (that do occur during these altercations) are more commonly accidental with no intent (of death) existing. That shouldn't imply that they are less serious (when they do occur), only that the manner that they should be responded to is often different than those that occur with a stranger.
Though the average student believes that they are training to combat a stranger, the statistics show that they are more often likely to be involved with someone known to them. This will effect the manner and types of techniques that they will feel comfortable with using. If/when they are only taught those techniques that are (only) designed to “work” by causing serious injury (damage) to the aggressor, they are essentially left “defenseless”. “I” believe this is the result of instruction that is intended to (only) meet the “popular” opinion of defensive method(s) that emphasis those techniques that cause/create serious (physical) results.
At our school, we provide greater emphasis on the student's response to (more) commonly encountered initial aggressive actions (as opposed to the unrealistic “sparring” types of dueling confrontations, that in 35+ years of experience, including those in “security/protective” positions, has never occurred).
For the past 20 years of instruction, we have taught on the model of there being 2 (basic) types of confrontation. We have recently (for the past 4 +/- years) been using the “model” of a confrontation being either a “Predator”or an “Alpha” type of confrontation. “We” didn't establish this model, but we did feel it was a very relevant standard to utilize (see an explanation/definition of this model at “http://lowtechcombat.com"). 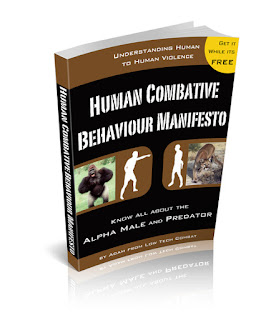 These amount to being a method of defining the “type” of confrontation that one will be involved in. This is important, in that it helps define how a student should respond to a situation that they find themselves in.
What we've found, is that the majority of methodology's and instructor's teach their students on the “Predator” model of defensive instruction. But the reality is that the majority of physical confrontations are (more often) of the “Alpha” variety. This is important in that it defines how/what should be taught to the average student.
This (additionally) fits (very nicely) with how Oyata taught us to utilize his instructed techniques and applications. Oyata emphasized that one's ability in the use of Tuite was vitally important in one's ability to defend themselves. Additionally, a higher level of skill in that ability would protect an aggressor as well (in addition to providing the defender with greater legal protection). This in no way diminished the importance of the instructed “striking” techniques, only that those non-striking (ie. Tuite) techniques were of more common utilization.
Unfortunately (IMO), the majority of systems relegate these (types of) techniques to a “beginner” (if not “amateur”) level. Because of this, the majority of practitioners and instructor's (in our opinion) possess only limited ability in it's use and application. Instead, they emphasize the “Punchy-Kicky” types of defense as being the “main” method for students to utilize.
Much of this belief, comes from (instructors) believing that the instances that it (Tuite) can be utilized (only) occur in the manner that they are (commonly) taught. That is the fault of the instructor, not the technique. The manner a technique is learned/reviewed during a class, is (most often) for the purposes of learning how/why a technique can (or can't) work. Person's who have been in physical confrontations (should) know that “grab's” occur during a confrontation on a regular basis. The fact that they are ignored (during those confrontations), is the fault of the instructor not the student.
Additionally, those situations (“grabs/pushes”) can often be created by the defender, thereby negating an eminent “striking” situation. This is another training aspect that is often ignored/not recognized.
A great deal of our frustration with how Tuite is being taught, is that we (regularly) encounter persons who claim that a (Tuite) technique will “not work on/for them”. This is (in every instance that we have encountered) the result of a technique being miss/incorrectly-applied. The second most commonly encountered situation, is if/when the person is attempting to utilize “strength/power” to achieve a result (with the techniques application). This occurs (almost exclusively) with “male” practitioners.
Every Tuite technique taught, should be equally applicable (by every student) upon any other student (including instructors) regardless of any size/strength differential between those persons (tori or uke).
If/when a technique is dependent upon “speed” (of execution), this too illustrates a lack of understanding (of the technique). Thus, “practice” of the instructed techniques need not be done quickly.
This doesn't imply that the techniques use is performed slowly, only that practice of the technique need not be done quickly to achieve the desired result (and thus allows for longer practice periods of the techniques, and will diminish the possibility of student injury while doing so).
Slow practice requires that the Tuite technique be performed (more) correctly. It additionally will demonstrate any possible “counters” (and how to avoid them) that become evident when the student is performing an incorrect motion (during the students performance of the technique).
The time that the “average” class devotes to the practice of Tuite, is commonly a (very) few minutes (30 minutes +/- is “average”). Including the instruction of the basic motions involved, the average time we spend for any of the instructed (Tuite) techniques, is commonly an hour. That isn't (just) the “basic” motion of the technique. It includes instruction/demonstration of the most commonly made mistakes made, as well as the resultant “counters” attempted (because of those mistaken application manners).
It has become “common” to teach strikes to be included with a Tuite techniques application. We do so as well, but they are not a “mandate” for the application to work (and are not included during the initial instruction of a technique). They are only taught as a distraction and/or addition to a techniques application. They should never be considered to be mandatory to achieving a successful (Tuite) techniques application (particularly during “practice” of the shown technique).
Although numerous Tuite applications can be (initially) “learned” in a single session (class), we have found that continued repetition of a techniques practice is necessary to instill a students “immediate” response/reaction to the techniques (“grab/pushes”) utilization. Each technique should be be attempted in every possible circumstance to establish a “familiarity” for it's use/application by the student.