Oyata taught that footwork was of the utmost importance in one's defensive ability. This was conveyed with the saying “Bottom body controls the upper body, Upper body controls the bottom body” (ka ho shin, jo ho shin). To have effective techniques, requires that the correct angle of application be utilized. This implied that use of the proper footwork was essential to make that correct “angle” possible.
This means that the correct stance and direction must be utilized when attempting to use an application (Striking, Tuite, Kyusho/Atemi, etc.). The practice of kata aids in that understanding, but only illustrates a general reference.
The understanding of the mechanics of the human body is of utmost importance to be able to accomplish this. Stances provide a starting point for understanding this ability, but knowledge of the human body's R.O.M. Will complete that awareness.
Once these factors are understood, the student will become more effective with how to utilize and exploit them (using the instructed techniques).
This understanding is not (only) the understanding of one's own body position (though that is a critical factor, as will be demonstrated in the following text/diagrams), but recognizing what the position(s) of an aggressor allow for, and what their advantages and limitations are as well.
The human body is designed to exert force forward. Every limb has evolved to make this the most efficient direction to apply force/momentum. This efficiency decreases as it deviates from that (forward) direction. The least efficient direction, is to the rear (behind the person) and is greatly diminished when utilized across (towards the opposite side) of the body. Even when utilized to the same side (ie. Directly sideways) momentum/force is limited to that which the limb alone can generate (use of any “body” momentum is greatly diminished as well).

One's foot direction will (substantially) effect that efficiency as well. If/when one's foot is rotated beyond 45º (in either direction), the stability of the assumed stance can become compromised (and thus becomes “unstable”). Though often noted in the stance of an aggressor (uke), it is of utmost importance to the defender (tori) as well.
The most efficient direction of one's motion (regardless of which motion), is forward (in generalized terms). Knowing this, when students are taught the individual stances that we utilize, they are shown the correct positioning of the feet. How one's feet are orientated will determine the direction of their torso's most efficient direction to apply force/momentum (technique/application).
Even in the most "simplistic" of stances, even slight foot rotation will (either) aid, or render the legs useless in achieving the desired motion.

The foot positions shown above (in the “stances” examples) illustrate the correct positioning of the tori's feet. Though (initially) seeming odd, that positioning effects both (though mainly) the legs, and the torso's directional options (and thus, The most efficient direction for the application of a technique). The user's positioning of the feet will determine how much of the available force can/will be directed into an application in a given direction. 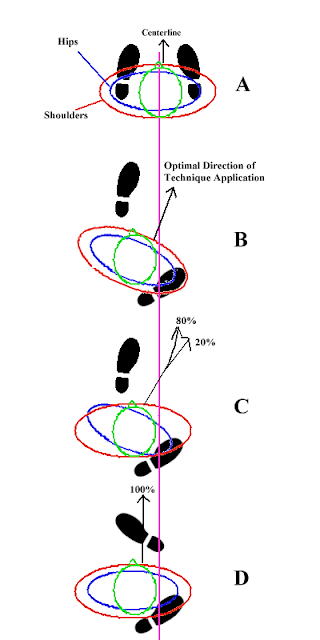 I've become fascinated of late over the debate concerning rotation of the body, via (either) the “Heel” or the “Ball” of the foot. I've read several dissertations on the topic (in favor of either), and I find it a little interesting, but mostly ridiculous.
It isn't an “either/or” topic. Depending on the situation, either could (or should) be utilized. Each will accomplish more than (only) one result from it's use, and are subject to one's assumed stance at the time. When force efficiency is factored into a motion, it is important that the intended “outcome” is considered (and understood) with every motion that is being made. Students of Oyata's methodology learn early on, that footwork is vitally important to the utilization of force efficiency. 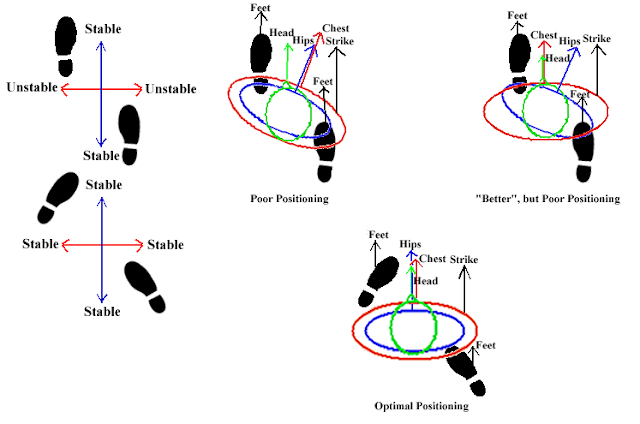 Though no numbers/percentages are provided, the diagram is only intend to illustrate  the differences between the positional situations shown.
A student's understanding of “footwork” begins with their practice during the formation portion of a class. While a student is performing various hand/arm motions, the student will be positioning the heel, or the ball of their feet (as required by the individual technique/direction being performed). These positions and changes are often dependent upon the individual technique/motion being performed at the time, the stance and direction of application, the situation, as well as which hand/arm is being utilized. 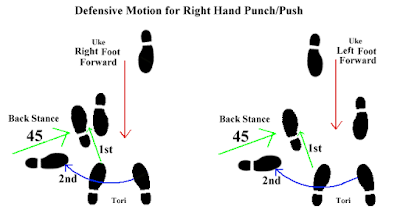 The footwork illustrated above, is common for use with either a Tuite technique application, or when defending against an aggressor's strike attempt. It illustrates the use of Oyata's "Hourglass" (footwork) back stance.
In many methodology's, students are shown their systems stances, provided with a brief explanation of them, and are (often) then promptly forgotten/ignored (by the student).
Keeping all of this in mind, the student should strive to have their chest/shoulders remain in-line with the hips. This prevents the torso from becoming twisted (and thus degrading the structural integrity of the position).
As can be seen with the provided illustrations, the positioning of one's feet can/do effect the alignment of the upper body as well as the legs. The effect from any rotation of the torso, will mandate a positioning of the feet/legs as well (to maintain the entire body's structural efficiency).


Posted by Openhand No comments: Links to this post 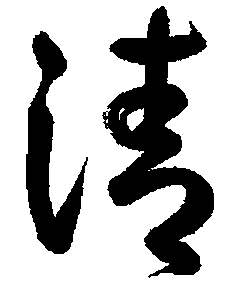