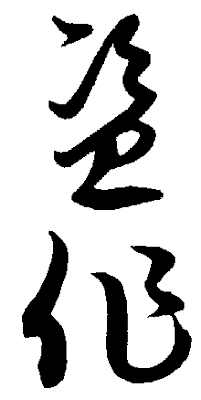 Updated May 22(see below article)


Wow, I was fully aware that the many of the Krotty schools out there were run by “less than respectable” individuals, but I “presumed” that they were more subtle than what I encountered last evening (while cruising the Internet).


A page was brought to my attention, so I checked it out. Low and behold, there's a copy of the Dojo Principles that my associate and myself brushed, and put together. But ODDLY ENOUGH, it had been altered. Though retaining my brushed kanji (within the subject matter, I.E. The Dojo Principles), they “cut and pasted” their own style, names onto it. They also (obviously) redid the title (and “that” was supposed to fool someone???).


No doubt as soon as this post is up, they will be removing it. Why? Because I am going to post the schools name, website and group affiliation. These people are thieves (the brushwork is mine, not theirs), they then have the audacity to place a “copyright” post on it! (WTF!!!). I have no-doubt that the “©” mark is invalid (they just put it on there to impress someone, AND they don't know how “copyright laws” work, LOL). IF, they were stupid enough to attempt to copyright the piece (and received one) I may become a VERY well to do (financially) individual! falsifying a copyright validation is considered a felony and/or can be very COSTLY to fight (or in this case settle) and I can EASILY provide the proof of their having done so (We have all the originals from the project).


These dirt-bags even dated it 2015 (the “copywrite”) yet, the date on their plagiarized copy is “2010 (?) the variances in the piece are obvious (where they added their own kanji).


In the past (for the most part) I have (usually) refrained from directly “bad-mouthing” most individuals and/or organizations, these thieves (within this group) in particular were avoided because of a prior (20+years ago was the last contact) association to/with their groups leader to Oyata (despite any claims made otherwise by them or any of their minions).


This THIEVING SCHOOL is the “” dojo. They are a member of the RYUKYU KEMPO RENMEI (aka the "Ryukyu alliance), "Google it", they're also on "Facebook".  They (RKA) like to “quote” their leader's sayings (which were commonly and originally heard from Oyata), but are presented on their website(s) as if their (present) leader had originated them (very much like MY brush calligraphy being presented as if “they” had brushed it).


This website “(no longer listed, see below)” doesn't list a location/address (?), on any of the sites linked to upon it (that I found), so I have to assume that they are aware of their thieving of the aforementioned artwork (and can thus avoid legal servings).
*UPDATE I (finally) found that they are in NEW YORK, USA. (thus, making them more easy to prosecute).


It was asked of me if I should “discreetly” inquire into this matter, I promptly stated that “NO” I should NOT. IMO anyone so STUPID and/or so arrogant to think that they can blatantly steal someone else's artwork/calligraphy (and imply that they did it) can kiss my (and my lawyer's) ass.


I have in the past (and even the present) provided calligraphy for individuals (often at no charge). What pisses me off, is that they simply stole it, then presented it as being theirs! (though never directly stating as such).
If this is "typical" for the behavior of these guys, then I would advise anyone to avoid any affiliation with them and/or their organization.
Though (by no means) an "expert" (at brush calligraphy), I have been practicing/studying brush calligraphy for over 20 years. I am a certified instructor of/for the Japanese Calligraphy Association. I hold an instructor's license (Menkyojo) for teaching that art and I provide both weekly and seminar instruction for the practice of it.
Being that I do so (for a price), means that this organization is stealing my work (thus my ability to profit from my trained skill) and provides grounds for me to move forward with litigation against them.
Though having presented (smaller) examples of our piece (NEVER for "public" use), someone (?) had (obviously) "copied" it from the RyuTe® Website (which is copyright protected, yet They seem to have ignored) and began "photoshopping" it to "create"{sic} their own version (which could have been legally/properly created via a simple request). This was simply an attempt to make (steal) something for "personal" gain/profit.

BTW, Here is their "altered" copy: And here, is our Original: 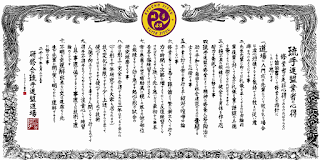 it doesn't take an art expert to see it was "copied" (and altered).

a false statement of a material fact,

The owner of the web site previously listed above (finally) contacted me. There was much apologies, and statements made that "his web guy (girl?)" was provided with the material to "make" a dojo principles "sheet"(?). At any rate that person (evidently) got lazy and just took ours and changed the logo and a few kanji (as anyone can see by the examples above).
Regardless of who was at fault, it has been removed. It only required (me) finally bringing it to his attention (after being posted here for 3 weeks), and it was attended to (ie."removed"). If asked, I would advise that the individual check the material being posted on his "web-site" more closely in the future.
Though having corrected the situation, and having apologized (profusely) and "I" having accepted that apology, this particular "blog" post will remain (for the next 2 weeks), after that time I will be removing the name of the offending dojo and the individuals names only, this blog will remain (that's the price you pay, for not monitoring your website, IMO, pretty "cheap" penalty). Plagiarism is a serious offense (both monetarily, and ethically), Hence, you should monitor your website more seriously). As long as the work (ie. "My" calligraphy) isn't utilized, I will not be pursuing any further legal action in this matter.