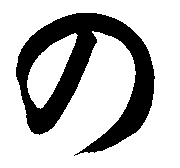 The practice of Oriental Brush Calligraphy has numerous correlations to the practice of a martial art. In his book, Taika had mentioned one of his instructors lessons that related to a particular “kanji”, exampling a technique's motions. Though not necessarily being a consistent analogy, when used as a (mental) exercise in motion application, it can expand one's conceptions of those motions in regards to (kata) motion interpretation, or even “Bunkai”.


For the majority of practitioners, knowing a single interpretation for each kata motion, is more than adequate to satisfy their level of study. As an instructor, that inquiry level should go (much) deeper.
Different instructor's utilize different methods to decipher the kata motions. Those interpretations should be made in conjunction to a set of standards (to establish a theorized motions validity) as well. Too often (IMO), so-called “Bunkai” are being demonstrated that are completely impractical (if even applicable) for the average student.


In order to (effectively) utilize this meme, one must establish a set of standards that will equate to any/every students abilities (male/female, young/old, strong/weak, large/small, etc.). Though these “standards” are subject to a students willingness to practice the technique's execution, the (typical) physical differences between subjects should make little, to no difference (in a technique's application and/or effectiveness).


As a student progresses in their study, they (typically) will tend to expand their practice/study methods to include different manners of practice that can/will broaden their understanding of their chosen art.


Brush Calligraphy is a very comfortable analogy to Oyata's Life Protection System. It is very easy to correlate the manner of brush manipulations used to create the kanji, to the hand/body motions that are seen in his system.


Just as a kanji can be brushed in several “styles” (of writing), a kata motion can be utilized in several different manner's of technique application. In one, it may represent a “strike”, and in another a grab. To limit one's understanding of a motion, to being (only) a single interpretation, is to limit one's abilities in applying that motion.


If one examines the 4 most commonly used “styles” of brushing the kanji, they will see 4 different methods of using a brush (when brushing kanji in each of those styles). This is akin to Oyata's instruction of technique/bunkai application (ie. There can be different ways to apply the same motion, that can result in “similar”, but different results).


Though hardly a precise correlation, the practice of brush calligraphy contains numerous similarities to the study of any protective/defensive art (in Japan, Shodo is a required skill to be practiced by students of Kendo/Iaido). When one compares the writing styles of the brush, to a students progression through (learning) a martial art, those similarities become more apparent.


Relating to the practice of “kata” (as an example), the motions are taught individually, one at a time. This is similar to how “Kaisho” (the “block-style of brushing kanji) is done. As the student improves in their understanding of the kata motions, they are shown to “group” those motions (into various sections). This is similar to how “Gyosho” (the “semi-cursive” style of brushing kanji) is brushed, often “combining” several individual strokes into one. As the student becomes more competent in those motions, they will combine all the instructed motions, to create a continuously moving exercise. This is most like “Sosho” (the “fully-cursive” style of brushing kanji). Like the kata, Sosho intends to give the appearance of one continuous brush motion across the page.


I tend to utilize my (own) practice of Shodo, to example the similarities to how the practice of kata are being practiced, not as something I will be required to replicate, but as something that can enhance my study/understanding for the practice and use of the open-hand art that was taught to us by Oyata.
The provided kanji and kana shown here, are simple but will directly illustrate several examples of this correlation to Oyata's Defensive methodology. The first (the Hiragana for "no") examples the 2-hand defensive motion, and the second ("ichi") examples Oyata's "Milking Punch".
This should not imply that technique is limited to (or even determined by) "kanji". Only that with experience, one will begin to see technique associations in numerous (different) types of applications. This is just one of those methods that will provide instruction in a "different" skill set as well.