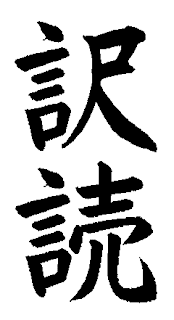 Back when the general martial art's public opinion first turned against kata, I only found it sad... (well, for them). For the most part, those who are against (the practice of) kata, don't know how to use them anyhow.
That's like saying that someone who can't read, is against books (their unable to read them, so why bother with them?). Being illiterate isn't a crime (it is a bit sad though). But one's knowledge level can only go so far, without being able to do so (read, that is).
I'm continually amazed at the length's that people will go to, in order to justify their displeasure with something that they have no idea how to use.
I'm sure the majority of this displeasure is (only?) with how they were told to use them (meaning kata). If any of those methods were related to sparring then obviously, they would be ridiculous interpretations (and I could understand their displeasure).
If what was shown, required some excessive amount of size, or strength, then those too should be disregarded. These systems (regardless of which individual one) were designed to be utilized by anyone. Though systems do exist for specific individual's, what is being commonly taught, are designed for the common person (male or female).
Kata, are the tools of continuing education. They both refresh one's understanding of existing concepts and motions, as well as enlighten the student to new idea's and perspectives. As long as one has been shown how to use them (correctly), then they are an unending source of personal research (for technique, motion, etc.).
Those methodologies that don't utilize kata, are not (what are commonly referred to as being) “martial arts”. And every time I make that statement, the first thing out of someone's mouth is “What about Jeet kun do”. Well, it's the perfect example. It isn't a “martial art”(per say).
What Bruce Lee wrote (in regards to JKD), were in regard to concepts and ideas. There were no set requirements, therefor no way to establish one's progress in what was being shown. His only goal, was to get those student's to let go of preconceived notion's (and restrictions).
Jeet kun do is a training method (of and/or for already known methodologies). The people who claim that it is (a martial art), have never read what Lee wrote in regards to it. Every (actual) student that he ever taught JKD (at least to any level of competence), already had some level of (basic) experience in an (actual) martial art/system.
Every school/instructor that (claims to) teaches JKD, begins their student's in/with some (other) system's basic motions. JKD concepts are (first) applied to/with those motions ,and are then expanded upon.
System's that don't use kata (in their student's curriculum), are sport based. It's those same system's that will emphasize that student's can only learn (how to protect themselves) through (their participation in) sparring.
Though I vehemently dislike Funikoshi, I will have to agree with his (general) sentiments about sparring. I disagree (completely) with what is commonly being taught. I don't believe in any form of “competition” sparring. The practice of it, should be restricted to (only) understanding the application and avoidance of technique.
Of course, what's being taught as “sparring”, is (IMO) incorrect anyhow. Kumite (kumi/combine and Te/hand), refers to doing (something) with a partner (in this case, the application of techniques).
What's commonly being done, is a competition for counting (limited) impacts upon a restricted number of locations on an opponents body (and sometimes “head”). This is further limited by placing both participants in restrictive positions and distances, with all striking to be done upon “safety padding”. The utilized techniques are restricted to individual impacts and non-cumulative locational striking (via a referee who will cease an attack, in order to cause both parties to start over following every “counted” strike).
When (actually) being performed properly, kumite will allow the (one) student to practice defending against a (mostly) full-power strike. Conversely, if the uke is “padded-up”, then the tori can practice full-power technique application. It's only when both student's are in protective gear (at the same time) that competitive tendency's are being introduced.
Kata, is not the end-all of practice methods. It is simply another tool to be utilized when one has no other training partner available. Though commonly utilized as a mnemonic for (basic technique and motion), it also has the potential for application and motion study (by the performer).
Virtually all of Taika's techniques are derived from kata. He had stated that even he didn't know every (possible) technique that was contained within those motions.
For the part-time (just passing their time) karateka, and for the sport/competition orientated student, kata most likely doesn't serve them any purpose. For what their doing, they would be better served attending a weight-training gym.
For myself (and my students) I view the kata as an indispensable reference source. The only trick is learning how to read them.