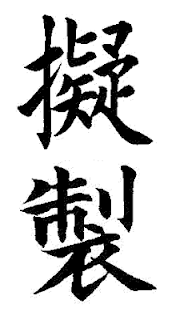 I've recently been watching “examples” of some of the top-rated Tuite lecturer's (I refuse to call them experts, because they're clearly Not). Take your pick of the “Big” names that put these on (I've seen videos of/for all of them). The vast majority are the self-promoted lemmings of the Dill-man (and are by far the most sad).

Though many have cut their ties with him, they still teach the same nonsense (promoting that you must learn all the TCM-B.S.). There are a few (damn few) that don't push the TCM drivel, but the majority of those folks, just do bad technique (thereby giving the impression, that one would need the TCM crap).

I believe their initial (and possibly greatest) failing, is in over emphasizing a (false) dependency upon (their version of) kyusho relevancy to the application of tuite. First and foremost, tuite is a physical positioning of a body limb. The majority of what's being taught (by these individual's) as/for “kyusho” points, are at best, simplistic atemi (types of) locations (and are rarely relevant to the application of/for a tuite technique).

The obviousness of these person's lack of knowledge is exemplified by their insistence on blurring Kyusho and Tuite (they are two completely different subjects), yes, they can be interconnected, but neither is dependent upon the other.

The subject that created (probably) the greatest "regurgitory" reflex response (upon myself) while listening to these peoples lectures, was their ability to completely walk around how (they insist) to properly apply a (meaning any) tuite technique.


It isn't that “I/we” are so F'n-”Great”, it's just that what they are teaching, is so F'n-”Useless”. It's as though (ya think?) these guys have never really studied the technique's applications and what it does and/or doesn't require to make or allow them to work.

What their teaching for “Principles”, are only generality's. And the majority of those, are (mostly) only applicable for striking situations, and not for Tuite applications (WTF?). What we are offering, are (actual, applicable) "Principles" relevant to the application of Tuite.

If given a lecture audience twice the size (of what was in attendance at theirs), we could easily instruct that (larger) group in half the amount of time (that they utilized). The biggest difference would be, that (if we were to of taught them) they would have been able to correct themselves following the lecture's conclusion (whether for the taught technique, and/or including almost any that they were shown afterwords), via our 6 tuite principles.

I will say, they have quite the racket going on though. The most prominent of these groups (“Kyusho Intl.” WTF is that supposed to imply?) has convinced a lot of sucker's with their nonsense. Not that they (probably) can't make a fair amount er,...well, some of it, uh, somewhat work (well,... at least create a result).

Having watched the representatives of these group's (on “U-Tube”) I've come to the conclusion that none of them have ever had to (actually) utilize these techniques, at least upon anyone besides their own uke's. Having watched numerous hours of these joker's lectures, I am amazed that anyone would believe that they know anything.

One also needs to remember, that these are the same guy's who will (actually, LOL) award some sucker a Yudansha ranking in “Tuite” , ROTFLMFAO (anything for a buck, huh?). What I find the most sad about that, is that none of those individual's (that I've ever seen and/or have met) knew anything (worthwhile) about tuite, and they still couldn't perform technique correctly (if at all).

Upon first hearing about this, my initial thought was that they must award “ranks” for the learning of every taught aspect of a martial art (ie. A ranking for stances, punches, kata, breathing etc.). But, as yet, I haven't seen any evidence of that, LOL.

It only further reinforces my personal belief that the arts have become so flooded with awarding of ranks, that anyone's rank means next to nothing (to myself). As within our own classes, I only recognize Yudansha and Mudansha (students). The individual level of either means nothing to me.


Unfortunately, it also means that the quality level of Tuite (in general) is becoming pretty piss-poor. I'm hoping that over this coming year we're able to rectify that to some degree, LOL (at least within our own association).