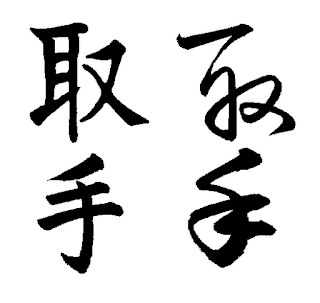 My associate and I, over the past 16 yrs. Have striven to improve our methods of instructing student's on how to properly teach and apply Tuite. Much in the same manor as one would approach bunkai (for kata), we dissected the general and individual tuite techniques to determine Basic principle's that would be applicable to all of the (taught) techniques. Though appearing to be a simple task (at the beginning of the project, LOL), we had to make numerous revisions and corrections until we came up with (what we considered to be) an applicable set (of principle's).


Though the final set of rules that we came up with will apply to many (if not most all) of the techniques taught, not all will apply to every technique. This was considered acceptable (to us) for their utilization as an instructional aid for our student's. What was finally (LOL) settled on, were a set of “6” (initial) rules, that one could utilize for determining any failure points during the application of a Tuite technique (on the part of the “tori”). When (and if) those “rules/principles” are followed, the attempted technique should function as desired (and expected).
Our base premise (for “practice”), being that the technique should be applied slowly, and that both individual's should know what technique was being attempted, and that the strength/size (of either the “tori”, or the “uke”) NOT be a requirement for the technique to function (elicit the desired initial response) or, be a deterrent to that response.

Needless to say, there was a great deal of experimentation done before all of those “Principles” could be established. We like to think, that we have accomplished those (initial) requirements.
If/when a student is experiencing difficulty with a particular technique, we train them to review these basic principle's to determine where the relevant problem is occurring. The principle that (at least initially) proves the most immediately applicable, is commonly “Arm Positioning”. The utilization of all of these practice rules and guidelines has proven (at least from our experience) to be extremely beneficial for our students.
These principles, are not (necessarily) “unique” to our classes/school. All of our “principle's” have been mentioned, pointed out, or are known by anyone who has (extensively) worked on RyuTe®'s tuite technique's. Though previous to our documentation or use of them (as a training/application “set” of rules), they were not utilized as applicable “principles” (for instruction/practice).

There are also 4 additional principles, but they deal more with variations of application, than with the initial application. These are usually shown to the student once the initial technique(s) application is/are understood by the student.

Beginning practice is always started with both parties standing an “arm's length” distance apart (face to face), both parties will be in a natural stance (and square to one another). We feel this is the most common “beginning” positioning for a confrontation/situation (that tuite would be utilized). Once that positioning changes, the confrontation has moved to a different “level” (and the various options that are available have changed). It's from this modified point, that the majority of system's begin their defensive actions (i.e. from having both parties being in “stances”), and from our perspective, they have “lost” a/the technical advantage.

It's this more aggressive attempt that the majority of the Tuite types of defenses, are designed to deal with. By being more aggressive (in their attempted action), they (the aggressor) change the manner which their aggressive action is performed. When someone shove's (with force), they will raise their pushing hand to their own shoulder, (usually) from adding a step towards the defender (will be adding their own “body-weight” to the shove) and therefor committing to the action.

Once an aggressor has committed, they are less able to redirect or change their manner of assault being made (in response to the defender's motions), which then provides more opportunity for the defender to complete their own defensive action.

Our application of Tuite, is designed to assist in the “De-escalation” of a situation, while leaving the user (of the Tuite technique) in control of that situation.
I've listened to various individual's claim that Tuite serves no purpose (or has any practicality) in an (truly) “aggressive” situation. I would dispute that claim (having been there-done that), “My” argument would be that they didn't handle/approach the situation correctly. Granted, not every situation “allows” for the use/implementation of Tuite, but when/if a situation is (able to be) handled correctly (and/or the opportunity presents itself), it can.

We train our student's in/with combination defenses for use against striking (types of) assaults also. We also don't emphasize one over the other (it naturally depends upon the situation). Too often (IMO), student's get the idea (?), that it's necessary to perform the flashy (types) of defensive technique's, when the situation could (more often) be handled with less aggressive (and some would say “passive”) methods. Of course, to believe that Tuite is passive, would bring the knowledge of the person that made the statement (that it was), into question.