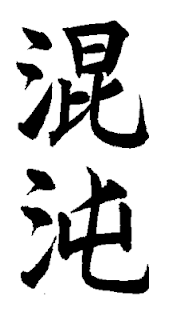 I was recently reading a blog who's author tends to lean towards the anti-traditional methodology's of training. I have no rudimentary disagreement with this attitude, but I do have to take exception with the notion that “traditional” training methods are useless (and/or don't work or serve a purpose).
Usually, my opinions of his articles are that they are just short sighted. Sometimes the points they make are hypocritical when compared to previous statements/positions that the author has made. Most often they are just entertaining. Yet, the reason that I return (to this authors page), is because some of the articles contain information, or a viewpoint which I hadn't previously considered.
This recent one, happened to be one of those that I disagreed with his view. The article stated that in a combative situation, chaotic action was more the norm (than anything that is practiced in the common defensive arts class).
To only a limited degree would I agree with his assessment. The point of disagreement on my part, was that chaos was the expected norm (a counter-logical argument IMO). His reasoning was (evidently) based on the fact that rarely (if ever) does a confrontation occur in any manor close to what's being practiced.
My agreement with his evaluation ends at this point.
To begin with, if that were true then everything that is being practiced at any class would be worthless, as none of the circumstances being practiced would ever occur (which isn't the case).
The reason those circumstances (techniques) are practiced, is because they do occur (with fairly regular frequency). What I disagree with, is that you can't practice to defend against them. It's this line of thinking, that convinced me to study under Taika.
What he (Taika Oyata) instructed, were defensive actions that protected the user regardless of what the aggressor utilized for an attack. Those defensive motions would perform their intended purpose (preventing the aggressor's strike from completing it's intended action) regardless of whether the aggressor utilizes their Right or Left hand for the attempted aggression.
In order to accomplish this feat, the defender's singular motion must be able to be easily, and quickly modified to function against any/all/each of the 8 possible hand strikes (Right or Left) that could be utilized by an aggressor.
The mistake that is commonly made, is practicing to defend against any (singular) particular type of strike. The student's practice should be in regards to the motion of the (tori's) defensive action (not the aggressive action that the technique is being used to defend against).
Too often defensive system's will require the user/student to learn a myriad of different defensive motions to defend against the various possible manor's of assault that could be utilized against/upon them.
By understanding the body's R.O.M., the defender can more easily be able to defend against (and/or predict any eminent actions of) any of the possible attempts of aggression made by an uke.
It's an obvious fact, that one cannot predict (exactly) how an aggressor will perform any particular aggressive action (Right, or Left). For that reason, a systems primary defensive motion performance must be able to (easily) adapt (with minimal variation) to deal with any manner of assault that an aggressor may choose to utilize.
Oyata's methodology does this through it's (combined) defensive actions. These motions are performed in one manor, regardless of what/how an aggressor chooses to perform their assaulting action.


Chaos, is only a contributing factor in the overall scheme of things. At the level of application and/or response, there are preordained expectations and limits (that can be accounted for). They may not always be anticipated in time (or even correctly, LOL) but in hind-sight, one will commonly see that the tori was usually provided with the clues that should have forewarned them.

Though Chaos (by it's nature) can't be controlled, the circumstances which it will/can occur, are able to be anticipated (and in some situations avoided). It is through rehearsed practice of generalized responses, that this can be done. Many of these responses are the "old-school" practice routines that are performed by numerous systems in their (individual) standard classes. Again, it isn't what they're doing that's wrong, it's how they're doing it that is.

I trust your judgement based on many years of study open hand and agree :)