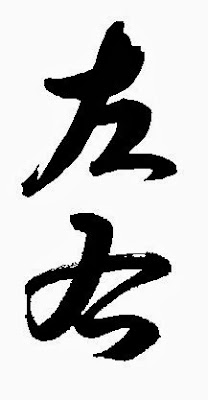 I was recently queried about movement. Though not (necessarily) an involved subject, it is one that gets side-lined by new students fairly often.
The individual who contacted me, utilizes the same manner (or close enough) of training methods that we do (at our school). They begin their (striking) technique practice, squarely facing each other (at an arm's length distance). Both person's begin with their hands at their sides. And one person strikes (the uke) at the other (the tori).
This person was having difficulty in moving their body (side to side) “quickly” when practicing at full speed (a potentially painful situation). It seems that no matter how quickly they attempted to move their head, they were still getting “tagged”.
Well, first off, you (probably) shouldn't be using full-speed punches, while attempting to figure something out (ya think?). Regardless, many people (over) focus on the head and shoulders when attempting to move them quickly (especially when a strike is coming at it). Start at the other end of your own body.
One needs to first understand the requisites to moving your body. A sideways shift (of the entire body), is (commonly) a 3-step process. To move to (as an example) your left side, you first (1) have to transfer your body-weight to your right leg. This allows you to (2) lift and motion your left leg to the left side. Once it arrives where you want it, your body-weight is (again) distributed accordingly (3).
This is how most people have moved/walked their entire life. In the (defensive) situation your describing though, it will never work (or at least, fast enough). The quickest way to increase your speed in accomplishing this (simple?) task, is easily remedied. Eliminate 1 of the “steps”.
Consciously “skip” the weight transfer. Instead, buckle the leg that you want to move (if you want to move to the left, buckle the left knee). When you do so, your body-weight is (automatically) transferred to the right leg (and your body/head is being motioned to the side that was buckled). It's then a simple matter to motion that leg where you'd like to place it. Though being a (seemingly) infinitesimal time difference, it is often sufficient to serve one's needs.
As one becomes accustom to this manner of motion, they can begin to include the rotation of the legs/torso (when appropriate to one's application). It's also important to remember to rotate the knee's (initially). Doing so will cause the entire leg to rotate (where as a rotation of only the hips, will not necessarily include the lower legs).
The ability to motion quickly (side to side) is an important skill to (defensively) master. It should be remembered that there are only 3 directions that can be moved toward quickly, Left, Right and Forward (movement towards the Rear is always your worst and slowest option). And yet, most systems will teach their “new” students (who know no better) to move towards the rear as their initial defensive direction (WTF?).
Unfortunately (for those “other” schools students), they also tend to have their students try to “block” the aggressor's “hand/fist” (as well).