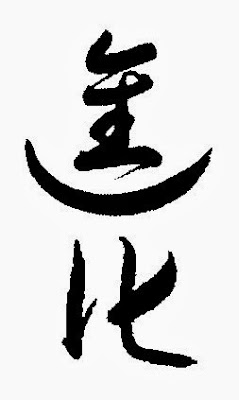 I've mentioned before that the name of our school is Kenshukai. This is translated as “Practice/Research Building”, Though teaching only one system (that of Taika Seiyu Oyata), we often experiment (ie. “research”) the movements and techniques of additional systems.
We teach our students the 12 kata that were taught to us by Oyata (as well as his instructors kata), and are constantly performing our own research into the interpretations of the movements contained within them.
Oyata (additionally) bestowed upon us a name for our dojo as well (Okishinkan-“Place of the Heart/Soul of Okinawa”). As well as teaching our own students, we've had several others who have attended our classes as well. Mostly to learn tuite, but many have attempted to learn Oyata's method of (general) technique application.
Oyata's methodology is different from what is commonly being taught. He was the first to emphasize the “one-second” defense (method). Drawing on his own experiences (in Okinawa), he knew full well that “Life-Protection” was not learned from tournament matches.
When Oyata first came to the U.S., he (still) condoned “sparring” (or at least “Bogu kumite”) by students. This was done because “that” was what was popular (at the time), and was the easiest way to gain the attention of prospective students (usually accomplished through a demonstration during the “intermission” or “half-time” of the tournament).
Once a large (enough) following was established, the practice of competitive sparring was considered to be an “amusement”, but was never considered to be a serious part of his methodology (at least by his regular Yudansha students). The subject (of “sparring”) was never even talked about during his (regular/weekly) classes.
Actual encounters were over in only a few moves (by either an aggressor, or by the defender). It was this premiss that Oyata taught his methodology. The ability to accomplish this feat, required precise placement of the taught applications, as well as having a greater understanding of what constituted reality (when practicing the instructed motions).
Though being meticulous (in regards to the shown kata), his emphasis was (always) on the performance of the taught applications. He considered a confrontation to only (allow for) consist of several motions occurring (by either involved party).
This required a higher level of precision to accomplish his (taught) methodology. Because of that, he was often very critical of his students (who were only of Yudansha ranking) performance.
The techniques that he taught, were rarely what one would consider “complicated” (in their performance), but generally required a greater amount of practice (comparatively speaking) to perform correctly.
Oyata's seminars usually consisted of teaching a “theme”. This was accomplished through the instruction of various (often simple) technique/applications. The techniques that were shown, were often irrelevant, the emphasis was on the principle being taught (the instructed techniques only demonstrated the principle being shown).
Persons that attended those seminars would often proclaim that they “trained” with Oyata, but this was more of a boast than an accurate statement. Attending a seminar only exposed those persons to his methodology (hardly a “training” experience, regardless of the number of them attended).
When one of those “attendees” began using the system name that Oyata was using at the time (as well as beginning to include a host of nonsense that Oyata disagreed with), he (Oyata) changed the name of what was being taught, in order to (more) reflect his methodology. This also allowed him to focus on his teachings (and to abandon any prior practices/methods that he disagreed with).
The majority of persons who actually did attend his training sessions, would often quit (and after a fairly short time). Most often because it wasn't what they expected (presumed) it to be.
Most people presumed them to consist of endless “knock-outs” and being subjected to repeated sessions of painful applications of tuite. Though occasionally including elements of these subjects, the majority of his classes were the (seemingly monotonous) review of kata motion (including the review of individual limb motion).
Western (American) students (as a rule), were (often) too impatient to study under Oyata. So the majority only did so for a short time (usually less than 6 months). Only in hind-sight can any long term student say that they were shown vast quantities of information.
It should additionally be noted, that Oyata was constantly improving what he taught. What was shown to student's when he first arrived here (in the U.S.), was greatly modified by the time of his passing (2012).
Numerous techniques, and how he wished kata to be performed were modified as he continued to improve his techniques and methodology.
Those individual's that ceased to study with him (or hadn't in years) still continue to proclaim that they're teaching the same thing (which is ridiculous to anyone who actually did continue to train with him).
That doesn't invalidate what those people are teaching, only that it isn't the same (and the comparison being made is false). If anyone were to compare what they knew/practiced 10, 15, 20 years ago, and compared it to what they do now, how much improvement would there be?
To claim to be teaching “the same thing” (after not training with Oyata for those time periods) is (at best) disingenuous. The man is now gone, the best we can hope for is to continue the improvement of what was shown to us (and to avoid taking that instruction backwards).