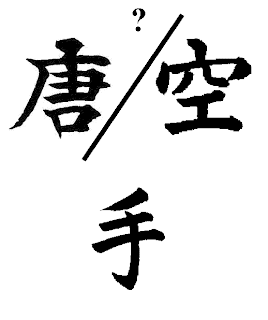 One of the more minor irritations that I commonly encounter, is the implication that Kara Te, is/should be translated as “empty-hand”. Though (at first) seeming to make sense (when viewing a Japanese/English dictionary), it's not entirely accurate.
Though initially seeming to be correct, it's an (IMO) very short-sighted translation of the kanji being utilized. The original kanji that was utilized was kara (meaning “China”). When the Japanese began their Imperial expansion, it became “politically correct” to change the particular kanji of “kara” to something not so volatile (given the fact that they were invading China at the time, LOL).
Considering their options, the form of kara that they chose to use was better than the other alternatives available (“corpse”, “Korea” and “Dead”, LOL). As with many kanji, there are multiple interpretations for the particular kanji that they chose to use.
The kanji utilized, also meant “open”, which was a much more acceptable word for what the Okinawan's view of the art. Though many of the “old-timers” retained the more simplistic (and encompassing) term “Te”, the modernists (of the time, 1930's-40's), began using the term “kara(te)” on a more regular/public basis (along with the “new” kanji).
I'm regularly irritated by people saying “empty” (hand), this makes no sense (in regards to what's actually being taught). “Open” hand is a direct correlation to what/how we teach. Only on rare occasion do I ever use the term “Karate” anyway (I usually condense it to only “Te”).
I'm sure (to some extent) this also relates to my practice of Shuji. Because of my involvement in it, I've read a number of Japanese/English dictionary's (as well as having heard Taika lament on the subject, LOL). Japanese Kanji are very often more involved than they would at first appear.
As a student (and instructor) of RyuTe® I'm quite familiar with the concept of the “open” hand (as opposed to the “closed-fist"). An open-hand is faster, stronger and offers greater flexibility in application methods. Even the RyuTe® “punching” hand (fist) is not clenched tightly (as is done in most methodology's).
Considering the popularity of weapon's utilized in the various Okinawan systems, the term “empty-hand” tends to make one sound ignorant of what the system's instruction (actually) consists of. As with the RyuTe® punch, the majority of RyuTe®'s hand technique's are performed with an “open” (unclenched) hand.
Taika often stated (as he did in his book) the open hand is one which is offering aid and assistance, the empty-hand is one that is begging. The student of Te, has no need to beg, the open hand is to be used to both help and protect.
What we study, is the Okinawan way of the hand, the open hand.