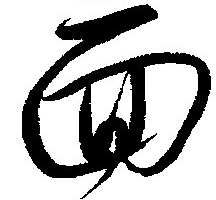 Of the numerous "saying's" that we utilize in our instruction of Oyata Te, one of the more commonly heard ones, is Face Your Threat. Though being a seemingly obvious statement, it is also a commonly misapplied strategy.
As with the majority of the instructed motions, whether a “strike”, a “Parry” or the application of a Tuite technique, the student should align their (entire) body to be utilized with the technique being attempted (that of their own body, not with the opponent's). What is more commonly seen, is that the student will (often) choose to align their body with the opponent's “center-line” (meaning their chest, or face), and not upon the (actual) threat being applied by the opponent (commonly their striking limb).
If/When making this attempt, one will observe the student's arm's motioning outside of their effective range for technique use/application. Will (can?) that motion still achieve an effective defensive action? Yes, but it will require a greater commitment and greater physical effort on the part of the student (in addition to requiring higher levels of arm motion/speed and strength to achieve their intended purpose). Doing so will also create a greater “recovery” time (for the striking arm's use in any required additional applications).
By (simply) rotating their body to “face” the actual “threat” (the opponent's striking limb), the student is more (easily, and effectively) able to utilize their arm's in achieving the purpose of the defensive motions being utilized. Though being a (seemingly) slight variance, this minor rotation (of the student's body) changes the range (and the effectiveness) of the student's limb motion (being used in their defensive application).
In addition to this use in responsive (defensive) actions, the same principle is used with the application of those techniques being utilized by the student (upon the opponent/Uke). When applying a manipulation technique upon the arm/wrist (of an opponent), the student will (or should) “face” the opponent's opposite arm/side (I.E. when applying a technique upon the subject's “right-arm”, the Tori should “face” (their body) towards the Uke's “left-side”, which is the actual “threat” at that time, during the technique's application). Student's will (often) attempt to align (their entire body) towards the “center-line” of the Uke. Doing so will require that the student expend greater/higher levels of force (muscle) to achieve the desired reaction (by the Uke). If/when dealing with a larger/stronger opponent, this makes the application of the technique more difficult to achieve the desired results (if any).
The use of this meme, is (often) the student's introduction to an example for, Force Efficiency. This principle is present in every (physical) motion taught and utilized in the Oyata Te system. It is present in every stance, every strike and every application taught. When a student is having difficulty with a technique, their “first” concern should be with their use/application of Force Efficiency.
When shown a defensive action, the student initially faces the impending threat, having responded to it, their attention is diverted to the next (imminent) "threat" (commonly from the Uke's opposite side). To accomplish this may require the student to realign (and/or "Rotate") their body in order to effectively do so. If/when the student attempts to (only) "twist" (their upper-body) to respond to the next/additional "threat", they will be slower and demonstrably "weaker" (with that attempt).
This can be (obviously) demonstrated by having student's attempt to “punch” (a bag or hand target) on one side of their body, with the opposite side's arm (without rotating their hip's/body or shoulder's). Even when allowed to rotate their shoulders (alone), there will only be a (minorly) appreciable increase of (delivered) “Power/Momentum” if/when the hips are included with that rotation. That level of (delivered) momentum, can be further increased, with the inclusion of the knee's/feet being rotated towards the location of the desired impact. This demonstrates another example for the principle of Ka han shin, Ja han shin (“Upper controls Lower, Lower controls Upper”).
Oyata showed/taught us that one's (arm) “techniques” should be applied (upon an opponent) within (what we refer to as being) the “zone/area of application”. This is (roughly) the area within the user's (own) shoulder width (horizontally), and between the (user's) “cheek” level and the “hip's” (vertically). Any (arm) application that is attempted “outside” of this area, requires the student to realign their body (to make the desired motion/application occur within that area).
Force Efficiency encompasses numerous factors, but the main concern/relevancy is in regards to the application of the user's (Tori's) motion (of their limb's and torso during the application of a technique).
The Awareness (and use) of this understanding can be used to recognize the strengths/weaknesses of an opponent/aggressor as well.