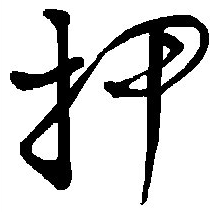 Pushes are a (somewhat) complicated defensive subject. Though being the 2nd (most likely) manor of beginning an assault, Students will often have a difficult time determining if/when a “push” can be considered to be a aggressive action (and “legally” justifiable for enacting a defensive response).


When viewed from a “legal” perspective, any physical contact (from another individual) provides a legal justification for a defensive response. Depending (of course) on how well your able to “justify” that response to a judge, is open to debate.


Oyata taught that enacting a (physical) response to a “push”, should be judged (by the student) through the situation that surrounds the enactment of that push.


Looking at the physical “act” itself, it is dependent upon the situation prior to the act itself. If the “push” is the result of heated verbal debate and appears (obvious) to the defender, that the situation will become “physical”, responding to a push (with a physical response) may be (legally) justified. If the “push” (only) amounts to someone placing their hand upon one's chest/shoulder (to gain one's attention), any justification for an aggressive response diminishes rapidly.


The instructed responses to those “pushes” (that are considered to be confrontational) are based upon the legal defense of preventing/responding to an aggressive (physical) behavior. There are no (or very few) limitations to defending one's self from being (aggressively) shoved/pushed. That includes allowing it (the shove) to occur. Physical contact is not required. Only the act of attempting to do so is sufficient to respond (to that attempt).


It is the perceived intent (of the attempted push) that will dictate the response that is made. Numerous motions can be utilized to (only) divert the intended push. Though preventing the initial action (the push) it accomplishes nothing in preventing further/repeated attempts. In those situations that it is (believed by the student) obvious that the motion is a precursor to a (continued) physical confrontation, it is more productive to attempt to neutralize the ability for the aggressor to continue any further aggressive behavior.


Though not always practical, responding with a Tuite application can provide the ability to neutralize the aggressor (and place them in a position of submission). As with “Grabs”, responding to pushes (utilizing “Tuite” to do so) requires extensive practice of the instructed applications.


A “push” can be attempted in several manners. The most common (aggressive) push, is accomplished by (the Uke/aggressor) raising one or both hands to their own chest (level), with the hand(s) “flat” (palms toward the intended subject). They (commonly) then step forward (putting their body-weight into the push) while moving their body forward, and extending their hand(s).


Whether the intent is to only rotate a (one) shoulder, or to knock you onto your ass, either will cause the student to be placed off-balance (often as a precursor to delivering a “punch”). Attempting to absorb the delivered force (of a Push), is equally problematic (on numerous levels).


The manor of (“Tuite”) technique utilized will be dependent upon the timing of the technique's application. Three possibilities exist, prior to contact of the push (while the push is motioning towards the student),  following the act of the push (while the aggressor is retracting their hand(s), and while the pushing hand is in contact (IE. during the push). Technique's exist for all 3 situations, and the student should be familiar with each.


All three situations contain (varying) difficulties in their application. Speed (in “catching” the hand) when the push is being initiated, and (sufficient) balance (after having absorbed the push), when the aggressor is retracting their hand(s), and the ability to "pin" the hand while the push is being performed.


When attempting to “catch” an incoming push, there are various (instructed) methods for slowing the aggressor's push (including stepping forward, rearward and to the side). Stepping rearward has the least likelihood of success (for numerous reasons). Stepping (or “shifting”) to either side, is faster/easier and will cause a (slight) unbalancing/hesitation of the aggressor. Doing so additionally provides opportunity to “grab” at least one of the pushing hands. Capturing/pinning the hand to the chest (though probably the easiest) requires a sufficient "grasp" be made (of the aggressor's hand). It additionally limits one's "counter" (attack) choices.


The practice of the instructed techniques is (commonly) based upon rushing towards the aggressor, and grabbing (one of) the intended pushing hands while being raised to the aggressor's chest (to enact the intended “push”). Being able to do so, of course requires that the Tori was aware of the probability of the action occurring.  If/when doing this is impractical or is (simply) missed, the instructed method is to (either) capture the pushing hand during it's retraction (following the completed push), or during the attempted "push".


When attempted as the hand is being retracted (and if/when the student is physically able to grasp it), application of the instructed technique is (often) easier to accomplish. This ability is also dependent upon the Tori having not been initially unbalanced by the performed push.
Regardless of which (timing/method) is utilized, each require sufficient practice with having performed the technique(s). It's true, that even a "sloppily" performed application can often garner (sufficient?) results, but as with any other technique, the more practice one has with the techniques, the better.