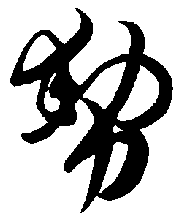 Having received (numerous) questions in regards to what I'm referencing to (when stating “Force Efficiency”), I will attempt to explain the concept, as we interpret it.


The human body is designed to move in particular directions efficiently (with force and ease). Though fully able to (physically) motion in additional directions, those directions are awkward if not (obviously) weak and uncomfortable. Despite this recognized fact, particular motions (technique's?) are shown to be performed in manners that (attempt to) defy their natural manner of motion. This results in “techniques” that are inefficient and weak. Though the body and it's limbs are capable of motioning in numerous directions, that fact should not imply that each of those (possible) motions are efficiently accomplished (nor even desirable).


This was one of the most emphasized points of Oyata's instruction. It is related to everything that Oyata taught (stances, motion, technique, kata etc.). It was this understanding that defined “Force Efficiency”. We began using the term to define Oyata's descriptions of how/why he instructed particular motions to be performed. The concept is essentially the recognition of how the body naturally performs an action or attains a position (whether the entire body, or a particular limb or appendage). It additionally defines/examples the bodies weaknesses.


To begin to understand this concept, one need only observe their own body and limbs. Through simple observation, one can establish what positions/motions are natural and which are awkward/weak. This is also evident in what positions are uncomfortable (if not painful) when achieved. Each (individual) limb has (different) Ranges of Motion (R.O.M.). Those ranges dictate how (if not why) a motion should be performed to achieve the most from the action.


When understood, this concept will illustrate how/why Oyata taught stances and technique's to be performed. This included how one should motion (footwork) when moving in kata (which further illustrated Oyata's defensive principles) and the relationship to the instructed defensive motions.


As an example, if one stands in a “natural stance”, and rotates their shoulders (to face more to their side), the body is “out of alignment”. The hips and the shoulders are “out of alignment”. This makes any action performed (with either the arm's or the leg's) weaker. This situation is regularly exampled by individual's when performing an action incorrectly. When this situation occurs (and it is commonly done), it is often not even noticed by the individual doing so.


When told to “correct” the situation, the individual will commonly move the shoulders to achieve the desired alignment. This is “one” way to achieve alignment, but what if the shoulders are (already) in correct alignment? (for the performed “hand” technique/application). That situation requires that the “hips” be realigned. Rotation of the hips is not (necessarily) achieved (nor even able to be done) by moving the hips (alone). To rotate the hips, one need only rotate the appropriate heel (of one of the feet) to attain the desired “hip” positioning.


This is illustrated by how Oyata would have us “modify” a back-stance. When one assumes the (commonly instructed) “Back-stance”, the forward foot is positioned to point forward, and the rear foot is positioned at a 45º. When this position is taken, the hip's are aligned at a 45º as well. Students will commonly have their shoulders “squared” with the opponent (directly in front of them), ie. Their “hip's” are out-of-alignment with their shoulders (or with the opponent), and (presumably) with the direction that a technique will be directed.
To “correct” this misalignment, the forward foot is rotated (“heel-in”, towards the opposite side). Doing so realigns the hips, to become “square” with the shoulders. The torso is now in alignment and able to more effectively deliver an (hand/arm) application. With many of the instructed technique's (and kata), similar minor corrections are required to achieve this “body alignment” (ie. “Force Efficiency”).


The “mistake” that is commonly made, is that person's will argue that they don't feel that they can deliver as “powerful” of a strike (as that is what the majority of practitioner's gauge “effectiveness” upon). They base this “belief” on how (much) they feel the technique (that they are performing). This is a mistaken perception. The fact that you are “feeling” the technique, demonstrates that not all of the generated energy/momentum is being transferred to the targeted subject/object. This explains that when a technique is delivered correctly, the user perceives little (if any) effort (on their part). This also demonstrates why the “hip shimmy” (when delivering a strike) is an ineffective (and wasted) motion.


The term “Force Efficiency” encompasses numerous individual factors, but they all are related to one's ability to most effectively apply an instructed application or perform a motion.